Hokkaido facility to churn out enough clean fuel for 10,000 vehicles

Japan's largest hydrogen plant powered by offshore wind energy is set to open on the northern island of Hokkaido as part of a national effort to slash carbon dioxide emissions.

Scheduled to begin operation as early as the year ending March 2024, the plant will produce up to roughly 550 tons of hydrogen a year -- enough to fuel more than 10,000 hydrogen vehicles, according to plans.

The effort represents a step toward creating a homegrown supply of hydrogen that is "green," or made using renewable energy. Green hydrogen produced with offshore wind power remains rare worldwide -- particularly in Japan, which lags European nations in building such wind farms.

The 110-megawatt wind farm and the hydrogen facility will be built in the coastal city of Ishikari, the site of other planned green hydrogen projects. The new, larger plant is expected to lift local hydrogen production to 2,500 tons. 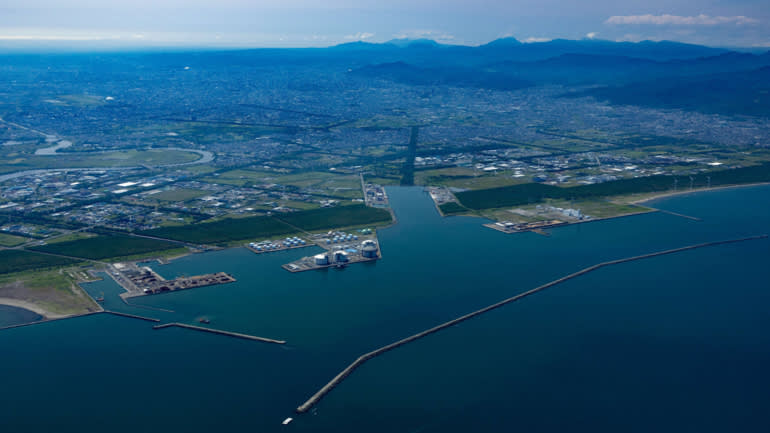 The hydrogen plant and wind farm will be built in the Hokkaido coastal city of Ishikari.

Plans call for selling the hydrogen in Hokkaido and shipping it to other parts of the country in a transport network that could include ports in Kobe, on the Sea of Japan coast and other areas.

The hydrogen will be used to generate electricity to power such infrastructure as data centers, cargo equipment in ports and refrigerated warehouses.

The Japanese government aims to attain net-zero greenhouse gas emissions by the middle of the century. Hydrogen is to play a big part of that goal.

The government's Green Growth Strategy announced last year calls for up to 3 million tons of hydrogen production capacity to be introduced in 2030, rising to about 20 million tons in 2050. This plan requires Japan to develop its own hydrogen industry without relying on imports.

Hydrogen is often produced from natural gas, but the process releases carbon dioxide. Green hydrogen, mainly made by splitting water with renewable energy, does not create the greenhouse gas in any part of the production process, making it a key component of decarbonization efforts.

The European Union looks to develop a capacity to produce 10 million tons of green hydrogen a year by 2030. In Japan, producing green hydrogen costs more than in other big economies.

It takes $6 to $9 to make a kilogram of hydrogen in Japan, according to data provider BloombergNEF.

Lowering the costs will require technology to transport hydrogen in bulk, as well as large-scale production equipment.

As an island nation, Japan has more than enough space to build offshore wind farms. But costs pose a hurdle.

The government aims to lower the price of hydrogen to 30 yen per normal cubic meter, or less than a third of the current level. Hokkaido Electric and the other investors will work to lower production costs in line with the government's outlook. This will be accomplished in part by expanding sales through marine routes and making use of financial subsidies.