Meet the Lightning-Fast, 7,400 HP Superyacht That Thinks It’s a Jet Ski The 114-foot "Moon Goddess" started life as a tender to a 250-foot mothership. Now she's a go-fast superyacht that is very much her own person.

The 114-foot "Moon Goddess" started life as a tender to a 250-foot mothership. Now she's a go-fast superyacht that is very much her own person.

For most boat owners, the idea of a tender is a rubber dinghy dangling on the back deck of the yacht. When Mexican billionaire Carlos Peralta went looking for a tender for his newly built, 250-foot Royal Denship superyacht Princess Mariana, he decided to go for something just a little grander.

Like a 114-foot, 87-ton rocket ship with a total of 7,400 horsepower and top speed of 50 mph. Christened Moon Goddess, the boat was designed to do a lunch run from Cannes to Corsica in the summer, or Miami to Bimini in the winter, while the mothership stayed at anchor.

When Peralta, founder of Mexican telecom giant Groupo Iusacell SA, decided to take a break from yachting in 2010, he put both yachts up for sale. After Princess Mariana found a buyer in 2011—her final asking price was $98 million—Peralta kept Moon Goddess at the back of his sprawling Miami estate on the Indian River near Bal Harbour. 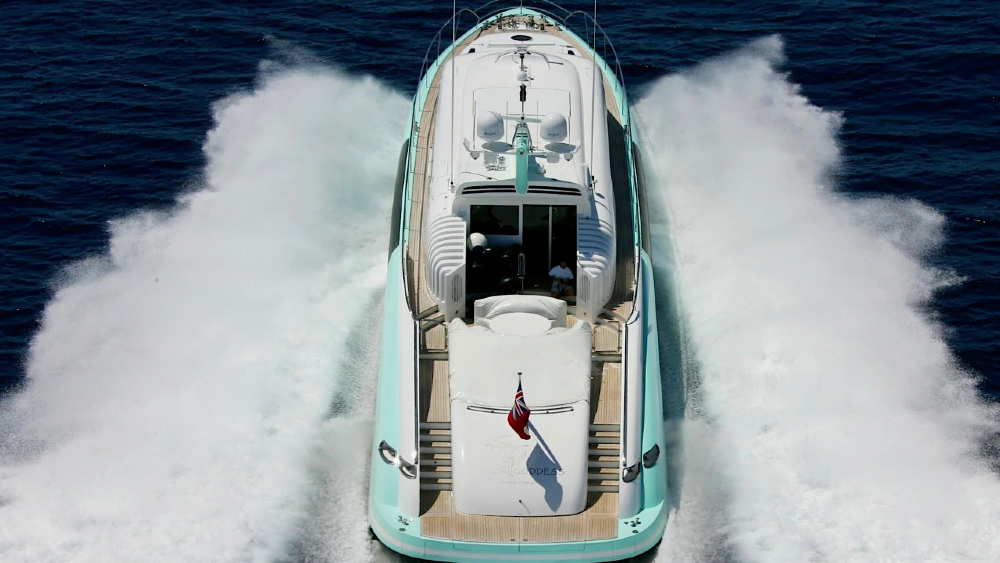 Initially offered in 2010 for $9 million, by 2015 the price had dropped to $6.15 million. Now the head-rotating super-tender with its oh-so-Florida seafoam green paintwork, is back on the market, and being offered through Camper and Nicholsons, for what seems like a fire-sale price of just $2 million. Especially considering that she had a major refit last year, with new teak decks, paint, and engine and generator overhauls.

Like Mr. Peralta’s Princess Mariana superyacht, Moon Goddess was designed by Monaco-based marine starchitect Espen Oeino and features the same, unique flared bow design. Oeino fondly recalls the project, noting it was one of his first. “I loved being able to design such a fast, unusual tender,” he says. “The owner gave me complete freedom on the design.”

Where the 114-footer really stands out is with its stunning, aircraft-style superstructure, its split, wrap-around windshield and curvy tumblehome. Just as the Moon Goddess name suggests, the roof features a huge retractable moon-roof that power-slides open to flood the cabin with light. 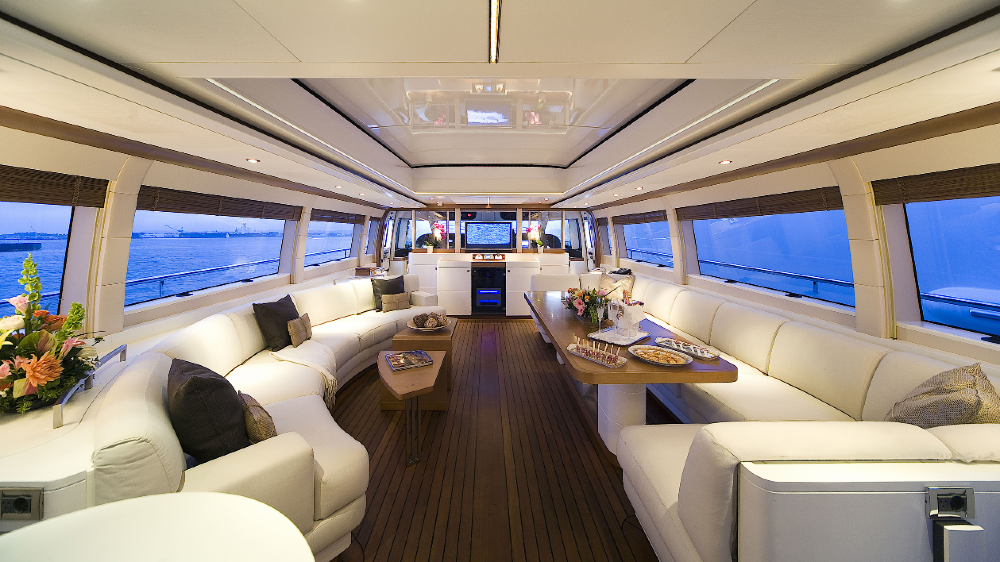 Skagen, Denmark-based Danish Yachts built the boat, using carbon fiber and Kevlar to make her I-beam stiff and, for her size, extremely lightweight. She was launched in 2006.

To give the yacht its sensational performance, Oeino specified a pair of thundering, German-made MTU 4000M90 turbo diesels that packed 7,400 horsepower.  Delivering all that mechanical muscle are twin Hamilton water jets linked to the engines via carbon fiber shafts.

“The volume of water moving through those jets is just incredible,” the yacht’s captain, John Greenwood, tells Robb Report. “At full throttle, the jets could fill an Olympic-size swimming pool in one minute.” 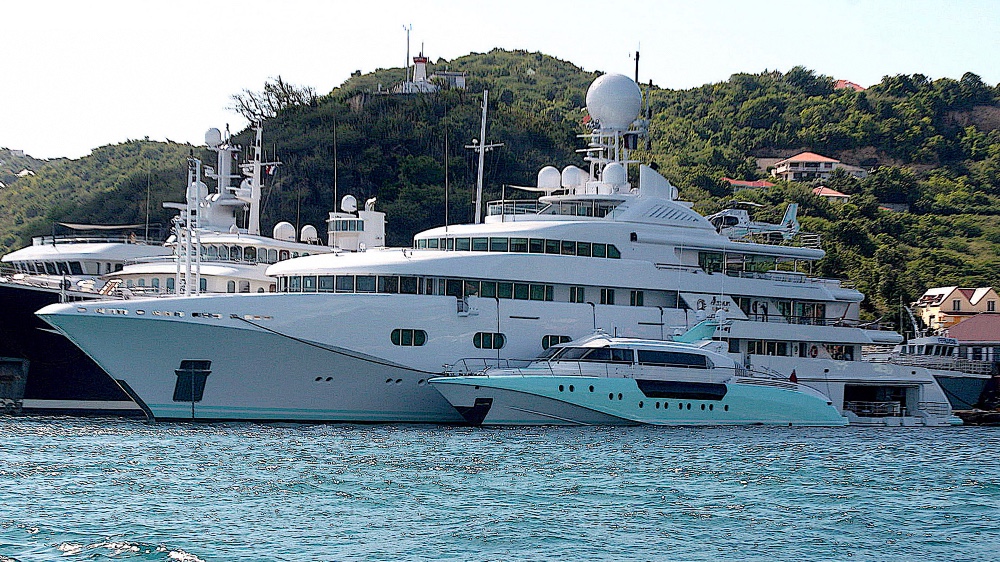 Greenwood, who has been captaining and caretaking Moon Goddess for the past eight years, says maneuverability is what sets the boat apart. “She spins on a dime, even at 40 knots. And flat out she’ll do 43, cruise all day at 25 and has a range of around 400 nautical miles.”

The boat’s top secret is its emergency stopping power. Hitting reverse at 40 knots will have the water jets instantly re-directing their huge thrust. The result; a full stop in an incredible one-and-a-half boat lengths. “At times it feels like you’re driving some oversized jet-ski,” says Greenwood. “It banks into turns and has the same kind of nimbleness and ability to change direction. It’s uncanny,” he explains.

Inside, the design layout is the work of acclaimed French designer Francois Zuretti. He gave Moon Goddess the look and feel of an oversized day boat, with an indoor/outdoor teak-decked saloon with big sofas for lounging, and an easy-on-the-eye neutral color scheme 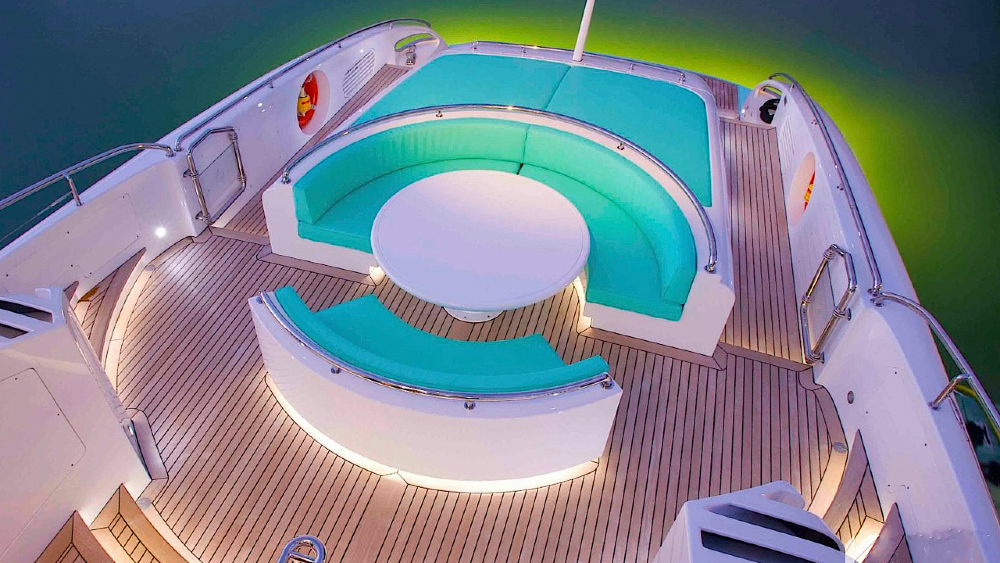 Below decks, there are three spacious cabins, including a full-width master suite. There is also a well-equipped galley, a dining area, a second saloon and crew accommodations for five. Her ear-bleeding 60-speaker audio system reportedly defies description.

“I think the boat is in the best condition right now that it’s ever been,” says Greenwood. “She’s ready to go. There’s no other design like this. It is definitely the most photographed boat in Miami.”