We match our performance model to some full-on acceleration data and discover something totally unexpected.

Off the line, the Rimac Nevera accelerates so quickly it wants to do a wheely, ruining traction on the front wheels. The car then pushes nearly all power to the rear wheels. We show you when and how much.

Please keep in mind that this is quite speculative. There were a lot of unknowns that we had to estimate. But we’d be willing to bet the trends and magnitudes we have estimated with our model are probably close. (See detailed discussion section for how we did the analysis)

Road and Track took a Rimac Nevera to the Famoso Raceway in McFarland, C,A and put it against Tesla’s pride of the fleet the Model S Plaid (video here). Does anyone remember the Beach Boys song “Shut down” with the line “Shut it off shut it off baby gonna shut you down”? Well, as everyone knew before the race, that’s exactly what happened. But this article is not about how Rimac made a laughing stock of the Model S Plaid (which it didn’t). It is about some more subtle features about how Rimac controls power delivery during full-on acceleration.

“Nevera has a 48/52 front-rear weight distribution the center of gravity almost centered between the wheels. With the rear motors producing full torque, the Nevera pushes  1.35 g's at launch. The rear axle’s massive reaction torque tries to lift the front end, shifting the center-of-gravity backwards and putting more weight on the rear. With the front end temporarily lighter, the front wheels have less ground pressure and lose traction, so can't produce much useful thrust. But once the acceleration drops to about 0.5 g's (about 155 mph) it appears the FWD starts to phase in to help the RWD push/pull the Nevera up to design max 258 mph speed.”

But how much goes where? Our estimate is shown in figure 1. Shockingly, during the majority of the ¼ mile run, most of the power is going to the rear wheels. The car's top speed is 255 mph. The front motors start applying more power between 165 and 255 mph. Another not-so-shocking result: The rear motors have twice the power as the front. 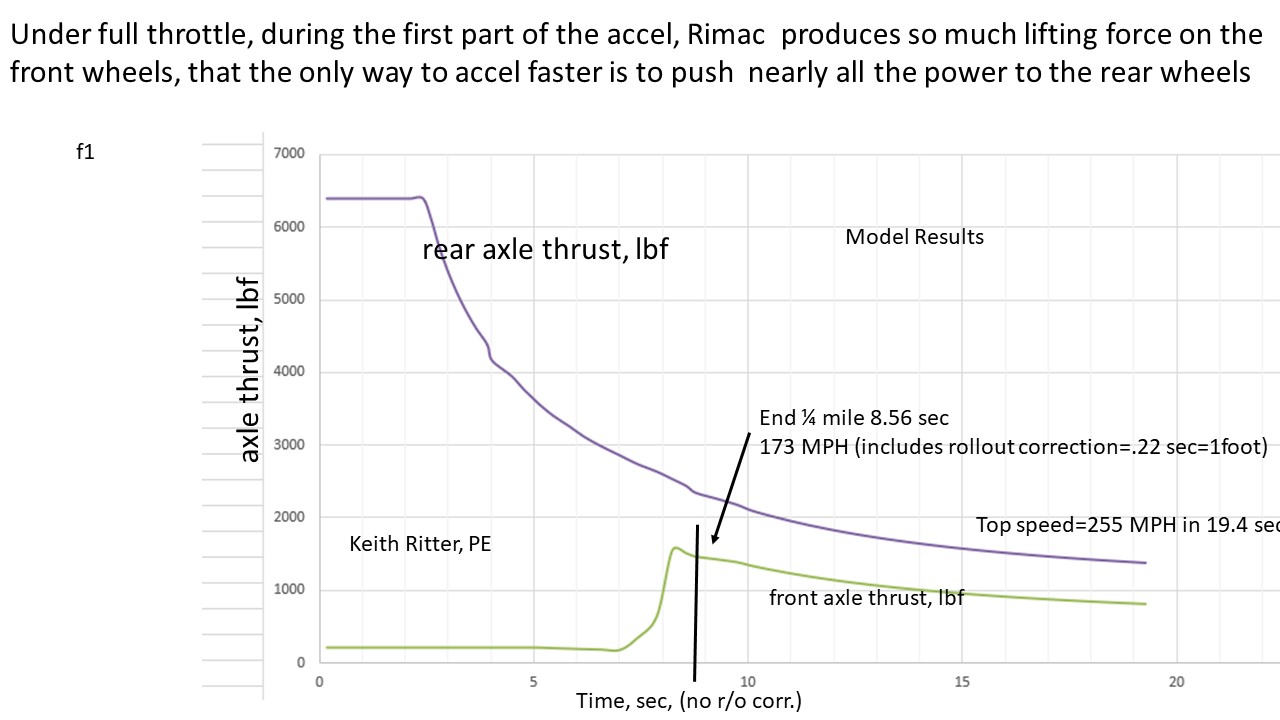 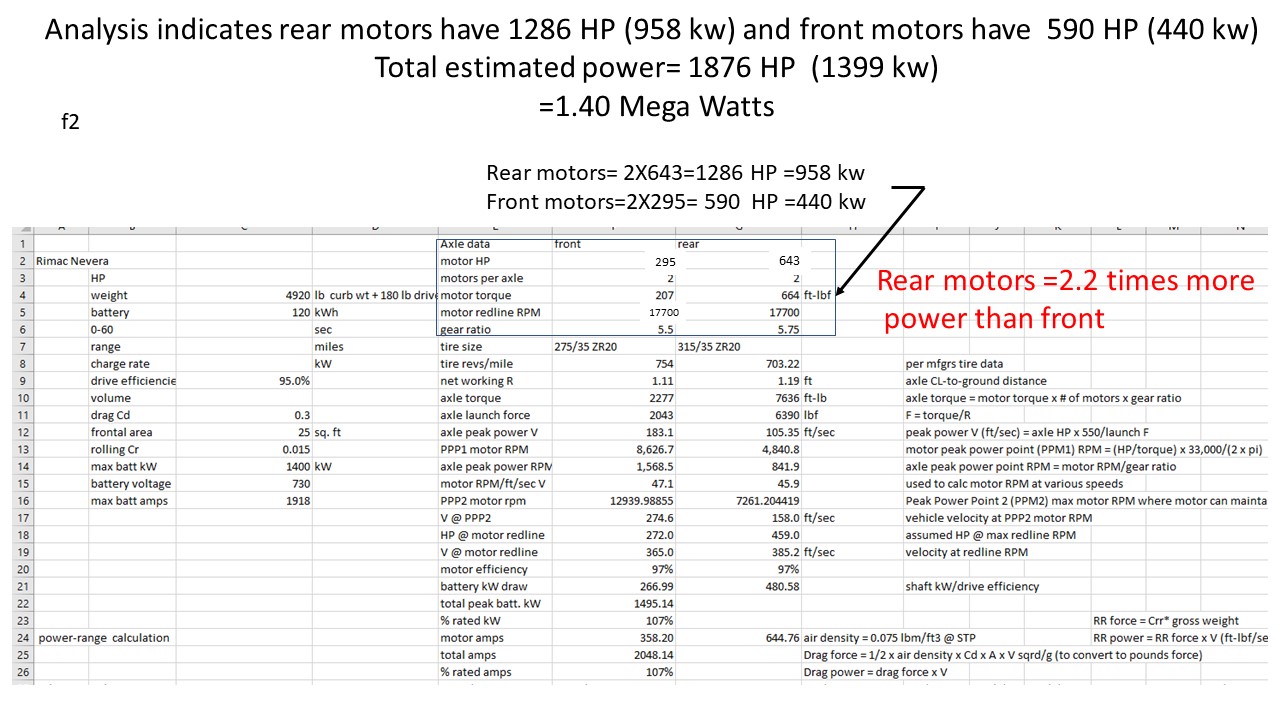 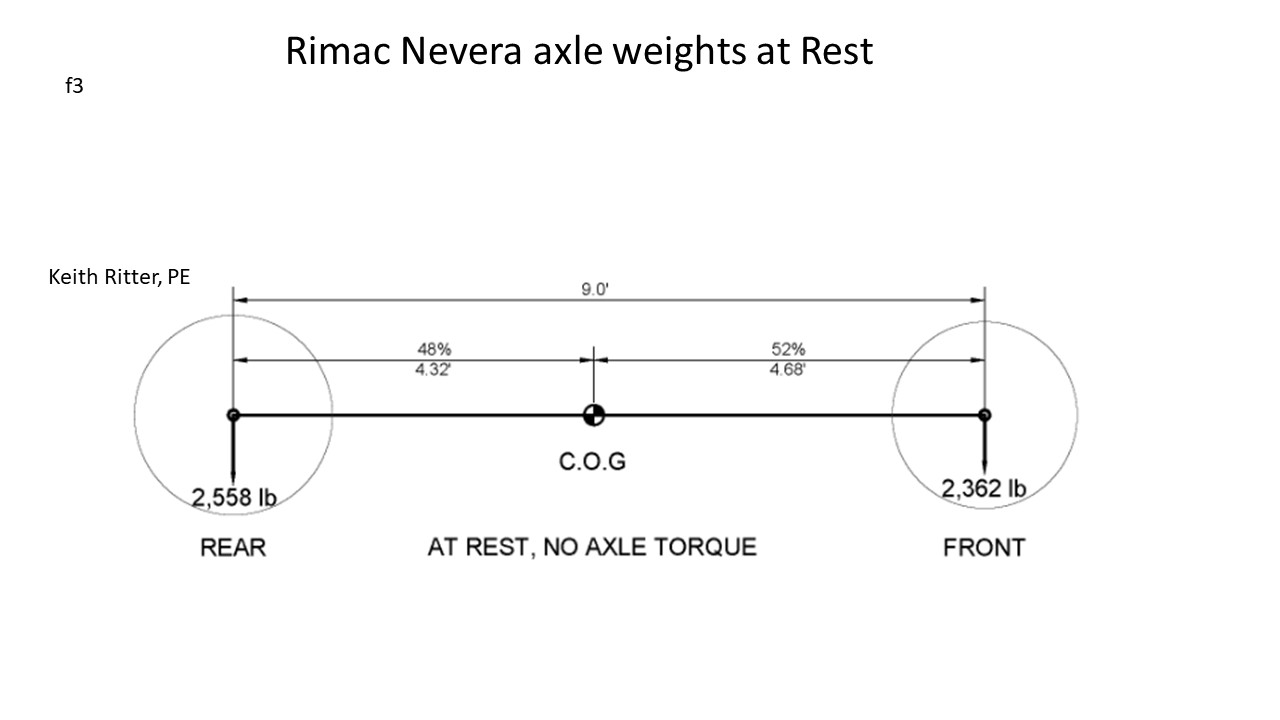 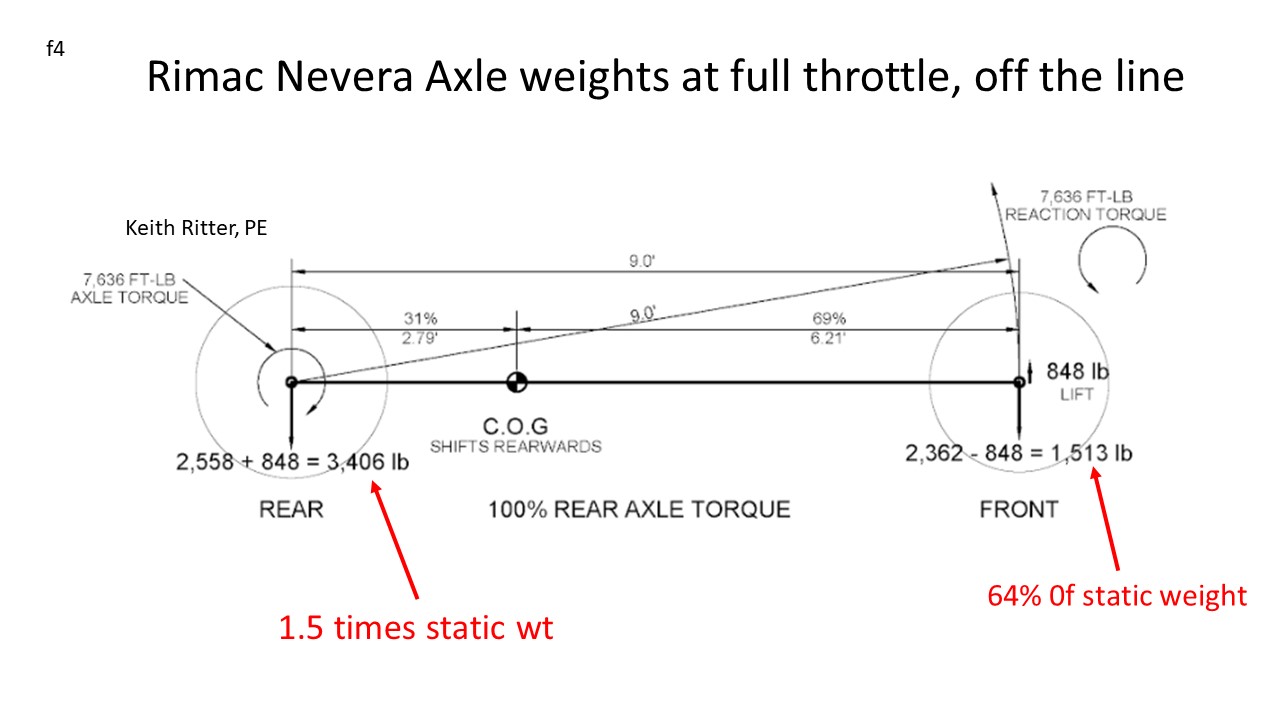 From our consultant: Keith Ritter

Total launch rear axle motor torque, per the performance calculations = 7,636 ft-lb. The reaction torque to this thrust torque de-weights the front end and shifts the center of gravity back towards the rear axle. This significantly reduces the effective front-axle weight and tractive friction between the front tires and the road. The rear axle picks up the weight balance, adding 848 lb downforce and greatly improving rear wheel tire traction.

The front-drive unit motors, relative to most FWD EVs, have very low maximum torque for their HP, especially considering their very low gear ratio (5.5:1). When in “launch mode,” they are the "second stage." This pushes their peak power point up to about 105 mph, holding at rated HP to about 165 mph.

My calcs suggest that the vehicle dynamics software probably severely limits the FWD acceleration contribution until about 160 mph. The rear motors’ power has sagged about 20% by that speed and RWD torque has dropped off. Also, the aero-down pressure has built up on the front, so the FWD finally has both the power and the traction to contribute sufficient thrust. 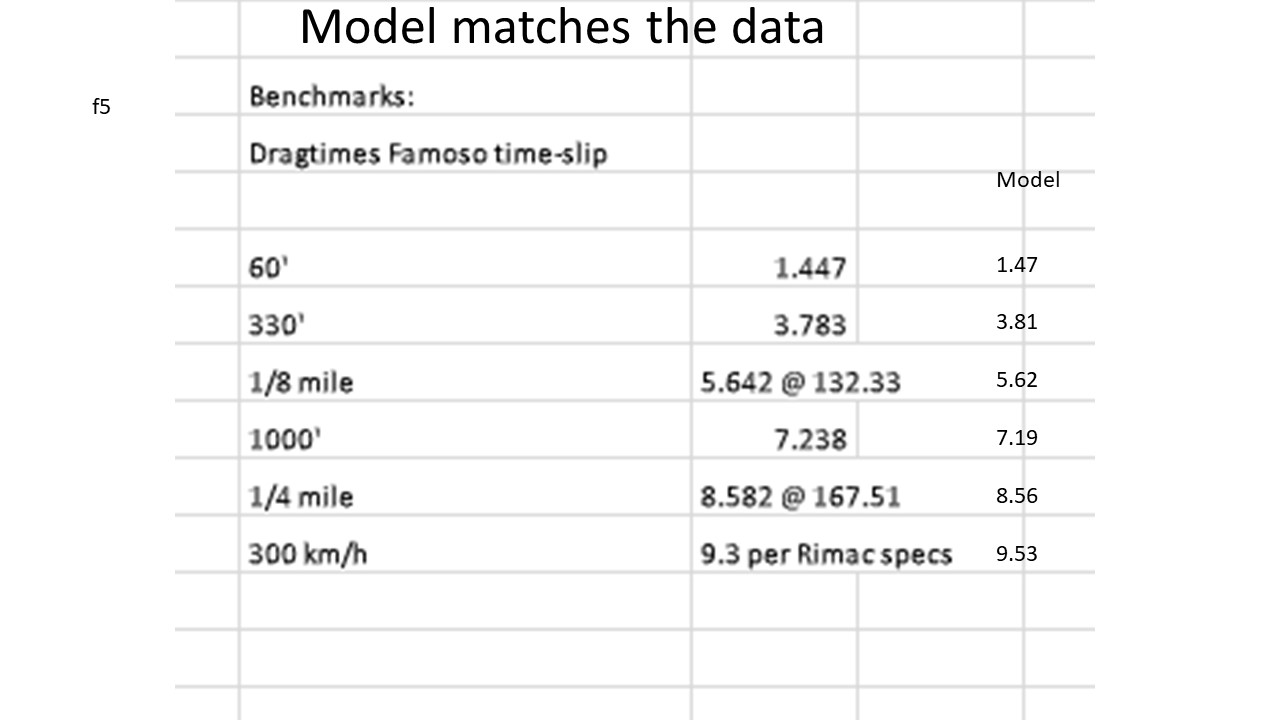 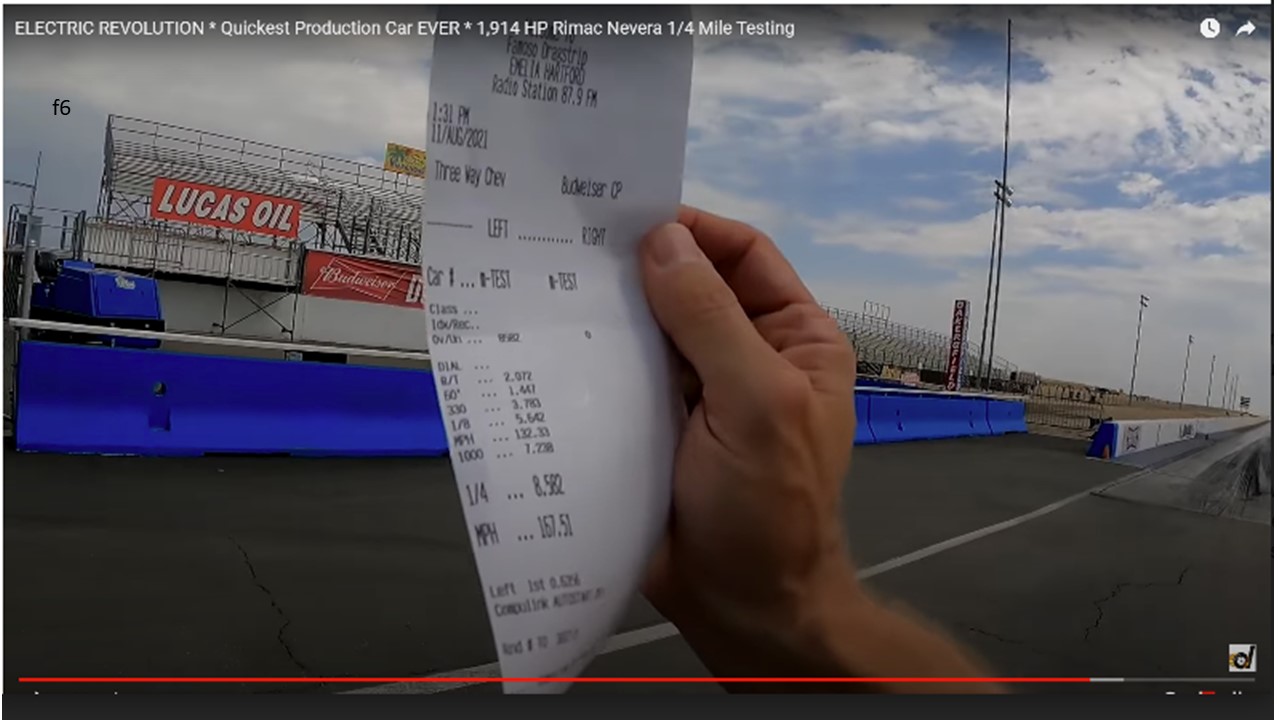 For the first iteration, I ran the calcs using both front and rear drives at full thrust. Model predicted ¼ mile in 7.44 seconds @ 189 mph trap speed about a second quicker and 20 mph higher than the data. That would have almost equaled Don Garlit’s world record run. And Big Daddy did that with a full-rail.

I realized the problem is that in launch mode, the Nevera is designed to primarily use just the RWD for initial thrust. It's already set up with a slightly rearward’s COG with the bulk of the battery pack in the rear, plus is pushing 1.35 g's at launch, so the vehicle effective COG weight shifts backwards towards the rear axle. The front wheels lose about 1/3 of their ground pressure, so can't produce much useful torque or thrust. But once the acceleration drops to about 0.5 g's (about 170 mph) it appears the FWD starts to phase in its power to help push/pull it on up to design max 258 mph speed.

Discussion of Construction of Nevera

"Most of the Nevera's key components were developed in-house in spite of high-profile partnerships with Porsche and with Hyundai, among other big carmakers, and nearly every part of the car has been improved since it made its debut as the C_Two at the 2018 edition of the Geneva auto show.

Its 440-pound monocoque is the largest single piece of carbon fiber used in the car industry, Rimac claims, and it plays a significant role in increasing structural rigidity. It's in this frame that engineers embedded an H-shaped, liquid-cooled lithium-manganese-nickel battery pack. Integrating the battery into the structure unlocks a near-perfect 48/52 front-rear weight distribution." 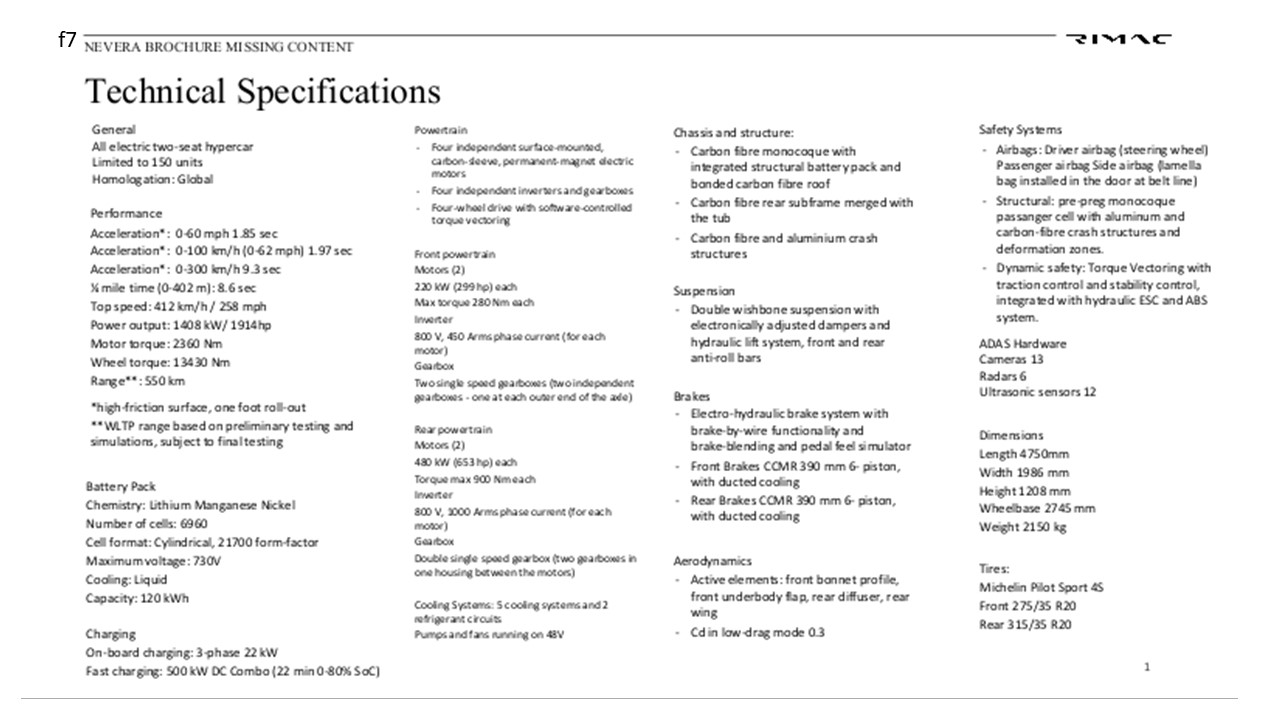 What you want for keeping the front down isn't necessarily what you want for optimal straightline acceleration. Optimally, you want as much weight as possible on the rear wheels, with just enough weight on the front wheels to maintain stability and control. That is why Rimac and most race cars put most of the HP and torque in the back, as well as some additional weight. Dragsters try to get it all back there, but performance cars don't just race in straight lines. Braking, cornering, etc. means a more balanced weight distribution, mostly centered in the vehicle to reduce axial and longitudinal moments of inertia and improve handling.