Cars and houses submerged in water, commuters wading through buses knee-high in floods, and homeowners counting the cost of destroyed properties.

Welcome to Lagos during rainy season.
Residents of Nigeria, Africa's most populous nation, are used to the yearly floods that engulf the coastal city during the months of March to November. In mid-July, however, the major business district of Lagos Island experienced one of its worst floods in recent years.
"It was very bad, and unusual," Eselebor Oseluonamhen, 32 told CNN.
"I drove out of my house ... I didn't realize it had rained so much ... There was heavy traffic on my route because of the flood. The more we went, the higher the water level. The water kept rising until it covered the bumper of my car ... then there was water flowing inside my car," Oseluonamhen, who runs a media firm on the Lagos mainland, recalled.
Photos and videos posted to social media showed dozens of vehicles inundated with water after torrential rain. The floods paralyze economic activity, at an estimated cost of around $4 billion per year.
Home to more than 24 million people, Lagos, a low-lying city on Nigeria's Atlantic coast, may become uninhabitable by the end of this century as sea levels rise due to climate change, scientific projections suggest.
The problem is exacerbated by "inadequate and poorly maintained drainage systems and uncontrolled urban growth," among others, according to a study led by the Institute of Development Studies.
Nigeria's hydrological agency NIHSA has predicted more catastrophic flooding in September, usually the peak of the rainy season.

Lagos is partly built on the mainland and a string of islands.
It is grappling with an eroding coastline that makes the city vulnerable to flooding, which Nigerian environmentalist Seyifunmi Adebote says is attributable to global warming and "human-induced action over a prolonged period."
Sand mining for construction is a major contributor to shoreline erosion in Lagos, environmental experts have said.
Manzo Ezekiel, a spokesman for Nigeria's emergency management agency (NEMA), told CNN that the riverbank of Lagos' Victoria Island is already being "washed away ... particularly in the V.I area of Lagos." "There's this problem of the river bank being washed away. The increase in water level is eating into the land," Ezekiel added.
In Victoria Island, an affluent Lagos neighborhood -- an entirely new coastal city christened 'Eko Atlantic' -- is being built on land reclaimed from the Atlantic Ocean, and will be protected from rising waters by an 8-kilometer-long wall made from concrete blocks, developers say. 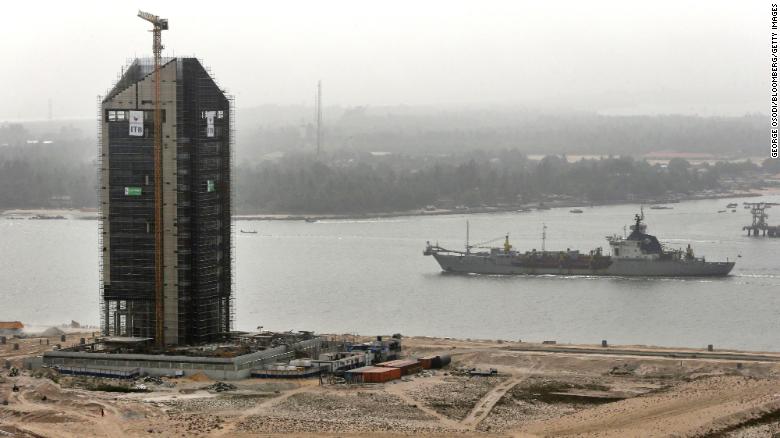 A cargo ship passes along a waterway during construction at the Eko Atlantic city site in February 2016.
While the ambitious project could contribute to reducing housing shortages in other parts of the city, Ezekiel fears that "reclaiming land from the sea will put pressure on other coastal areas."
Other critics have argued that adjacent areas not protected by the wall will be left vulnerable to tidal surges. CNN has contacted Eko Atlantic for comment.

Coastal cities at risk of being submerged

Low-lying coastal cities in some parts of the world may be permanently submerged by 2100, one study's findings showed. The study published by research group Climate Central stated that affected areas could sink below the high-tide line if sea levels continue to rise. 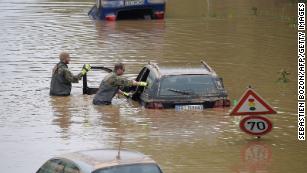 Deadly floods inundated parts of Europe, but the Netherlands avoided fatalities. Here's why
"As a result of heat-trapping pollution from human activities, rising sea levels could within three decades push chronic floods higher than land currently home to 300 million people," the study said. "By 2100, areas now home to 200 million people could fall permanently below the high tide line," it added.
Global sea levels have been predicted to rise more than 6 feet (2 meters) by the end of this century.
This leaves Lagos, which experts say is less than two meters above sea, in a precarious state, given that a chunk of Nigeria's coastline is low-lying. In a study from 2012, the UK's University of Plymouth found that a sea-level rise of just 3 to 9 feet (about 1 to 3 meters) "will have a catastrophic effect on the human activities" in Nigerian coastal environments.
Adebote told CNN that Lagos' fate "would depend on how we prioritize this science prediction and what corresponding actions we take as a response." "It is only a matter of time before nature pushes back and this could be a disaster," he added.

Perennial flooding in Nigeria's coastal areas has left many dead and scores displaced. According to NEMA data, more than 2 million people were directly affected by flooding in 2020.
At least 69 people lost their lives in flood disasters last year. In 2019, more than 200,000 people were affected by floods with 158 fatalities.
"Every year we witness flooding in Nigeria. It is a problem that climate change has brought and we are living with it," Ezekiel told CNN. 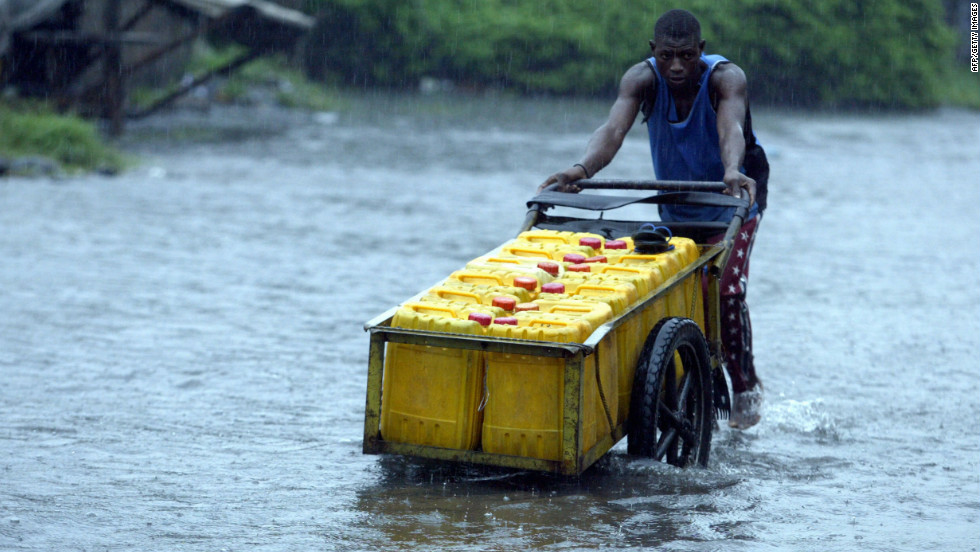 A man in Lagos wades through the aftermath of a heavy downpour in 2012.
Beyond Lagos' vulnerability to climate change, poor drainage systems and clogged street gutters in large swathes of the city are believed to have escalated its flooding challenges.
"As much as climate change plays a part in rising sea levels, what you can see in this video is predominantly a drainage system issue," a social media user tweeted while reacting to a video of the recent flooding in Lagos.
However, as flooding rages in some areas, low-income neighborhoods constructed on reclaimed wetlands have to contend with sinking buildings.

Adebote told CNN that for Lagos to stay afloat in the face of floods and rising sea levels, it must adapt to climate change.
"We need to look at our infrastructures -- drainage systems, waste management facilities, housing structures ... How resilient and adaptive are these infrastructures in the face of environmental pressures and when put side-by-side with our growing population?" he said. 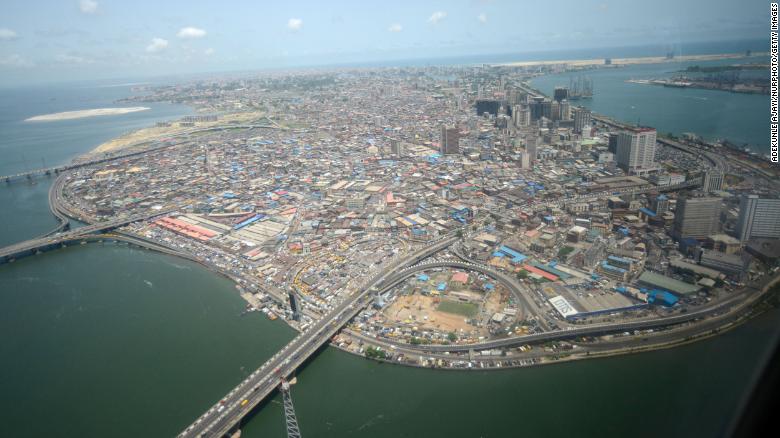 An aerial view of Lagos Island in Lagos, the commercial capital of Nigeria, in April 2016.
Authorities in Lagos have since commenced the clearing of the state's water channels to mitigate perennial flooding.
Nigeria's President Muhammadu Buhari has also expressed the country's willingness to partner with global allies in tackling climate change.
"We look forward working with President [Joe] Biden and Vice President [Kamala] Harris. We have great hope and optimism for the strengthening of existing cordial relationships, working together to tackle global terrorism, climate change, poverty, and to improve economic ties and trade," Buhari wrote in a January tweet.
But Adebote remarks that government responses to climate action "have been largely poor." 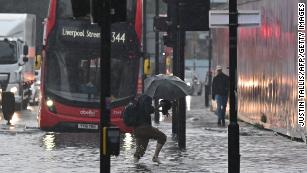 Floods in London are the latest sign big cities aren't ready for climate change
"There is a lot that must be done and will take consistent and deliberate actions on the parts of various stakeholders for Nigeria to properly take climate actions, especially in adapting to the impacts that are already threatening our livelihood," he added.
An environmental activist, Olumide Idowu, urged government authorities to partner with the private sector in order to boost funds to tackle the issues.
"Government should look at private sector partnerships in order for them to drive climate finance to solve the flooding issues," Idowu told CNN.
Nigeria's economy has struggled in recent years, shrinking financing for climate change and other critical sectors. Authorities are nonetheless still pledging to ramp up the country's climate change response.
Last month, Nigeria's Ministry of Environment announced a presidential approval for a revamped national policy on climate change, aimed at addressing "most, if not all, of the challenges posed by climate change and climate vulnerability in the country," a spokesman for the ministry wrote in Twitter post.
AD
AD
Share
Share Tweet +1