The Stanford Torus was the principal design considered by the 1975 NASA Summer Study.
It consists of a torus or donut-shaped ring that is one mile in diameter, rotates once per minute to provide Earth-normal gravity on the inside of the outer ring, and which can house 10,000 people. 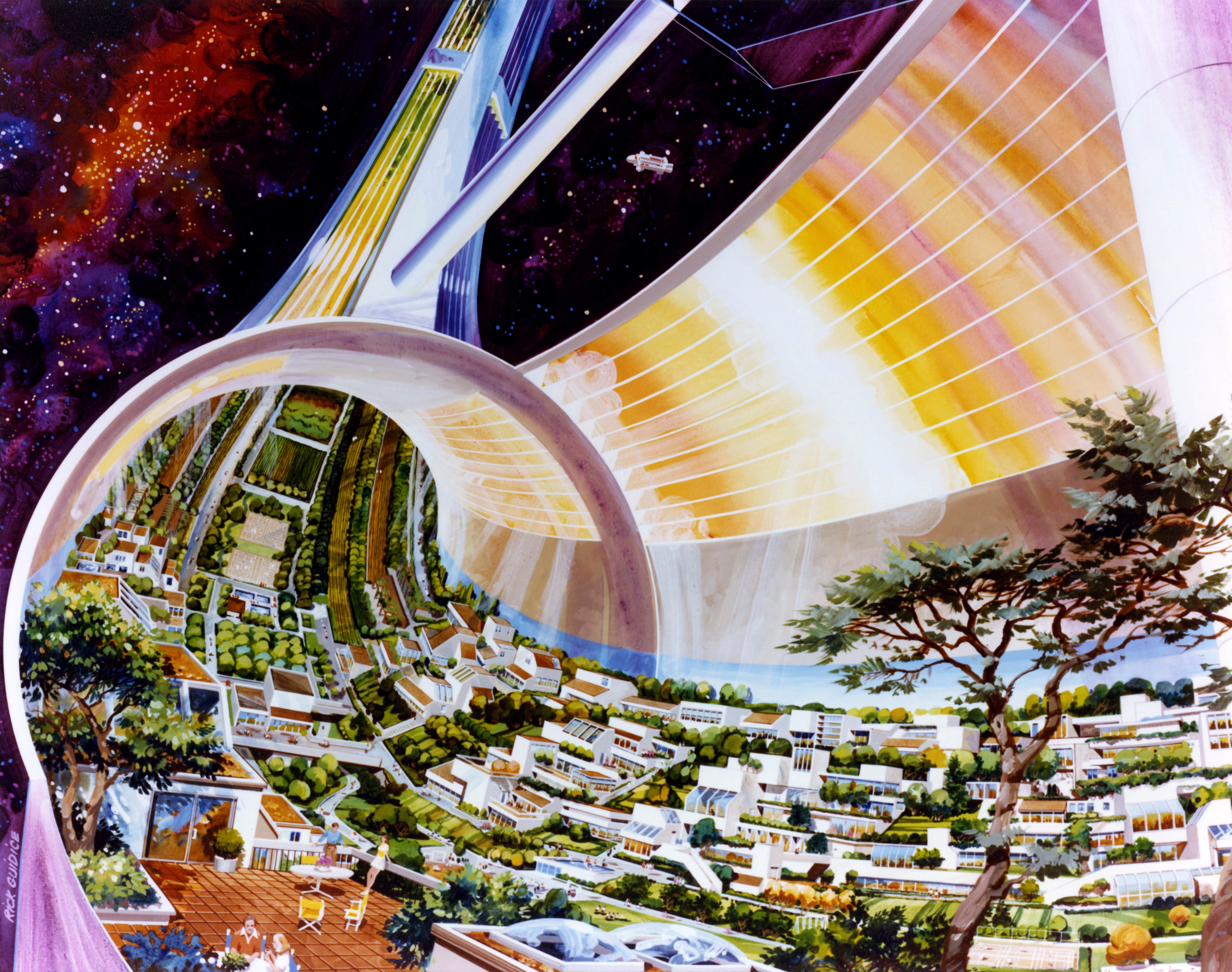 It’s a self-enclosed torus 1.8 kilometers in diameter, and would rotate once per minute to provide its 10,000 inhabitants with 1.0g of gravity. An inner ring is connected to the outer ring with a series of spokes, and provides sunlight set up with a system of mirrors, which provide light to the station. Bernal Sphere interior, complete with California-style wine and cheese party, and human powered flight in the lower-gravity area near the axis. Painting by Rick Guidice courtesy of NASA. It was to be a fully self-sufficent colony with the capability to produce food, support manufacturing, and enable high quality residences for its inhabitants. In the original report, the Stanford Torus team estimated electrical energy production to be 3kW per person. This estimate was derived from doubling the per capita electricity consumption of Americans in 1975. Given 3 kW per person, the total energy required would be 30 MW. Using an estimate of 1390 W per square meter of solar energy available in space and a 10% efficient solar cell, the Torus would require a minimum solar panel area of 215,827 m2. While per capita energy requirements are nearly the same today as in 1975, ~1.5kW per captia, the efficieny of solar panels has improved. Currently, commercial solar cells can reliably attain ~22% efficiency. The true feasibility of building and operating the Stanford Torus is still up for debate. However, this analysis, based on modern solar technology, does suggest that such a large structure in space could be supplied with electricity through onboard solar power generation.
Assuming a stable mirror can be put in place, the solar array of the inner disk could provide for approximately 2× the required electrical energy needed given a 3kW per capita usage.
What is more likely to be prohibitive is the size of the radiator.
At almost 1 sq. km, the amount of material required would be immense. Still, the energy is there if and can be managed if we can build the nessecary infrastructure. Back to Star Cities